There are many arguments put forward as to why increasing tax is bad for Australia and its economy. It is also argued that the stage 3 tax cuts due to start in 2024 will be good for the economy. Here are ten reasons why these are wrong.

1 // Taxation is not a ‘wet blanket’ on the economy, in fact, research shows it is the opposite

2 // FACT: lower taxes on high income earners do not encourage them to work harder

The argument that lower taxes on high income earners are needed to make them work harder and longer is also wrong. There is no evidence that any CEO or other highflyer has slackened because taxes are too high. No-one has yet told a boardroom that they would work harder but for the tax rates. But these work incentive effects do happen for low- and middle-income earners who face rising taxes through the withdrawal of benefits like government childcare subsidies. When those people face effective marginal tax rates approaching 100 per cent the incentive effect may occur. But that is not the case for those on salary incomes, earning many times more than the average.

It is argued that the stage 3 tax cuts which will happen in 2024, are fair because the overwhelming majority of taxpayers will face the same 30 per cent marginal tax rate.

While the income tax system will still be progressive, the stage 3 tax cuts will make them less progressive. A progressive tax system is one where higher income earners pay a higher proportion of tax.

Flattening the income tax scales is the same as reducing how progressive it is.

The tax cuts during the mining boom considerably reduced the progressive nature of the income tax system. Stage 3 will weaken it further.

5 // Whether it is on purpose or not, the fact is the tax system benefits men and exacerbates existing gender inequality

While the tax system may not be designed to benefit men, tax cuts including the stage 3 tax cuts reflect and exacerbate existing gender inequality. Men will get twice as much of the tax cut as women. For every dollar of the tax cut that women get, men will get two dollars. Australia Institute research shows all income levels have already been overcompensated for bracket creep. If we go back to the last tax swap when the Goods and Services Tax (GST) was introduced in 2000. Income tax was cut to compensate for the introduction of the GST. Since then income tax cuts have been larger than the effects of inflation.

The current stage 3 tax cuts mainly benefit high income earners, who are those who have been most overcompensated. These tax cuts will simply add more overcompensation for those why have already got the most.

When compared to other developed (OECD) countries, Australia has the 9th lowest tax to GDP ratio out of 37 nations. 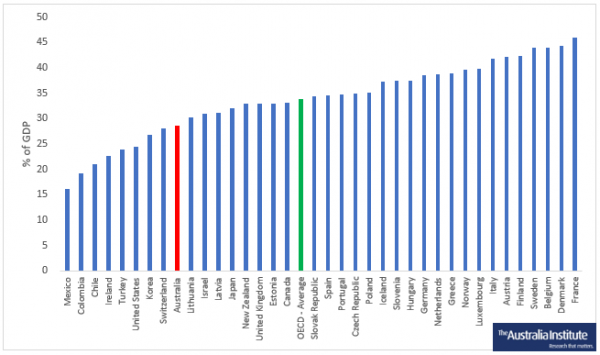 8 // In fact, today’s level of Australia’s Federal Government tax is lower than during the Howard Government

Australia’s federal tax to GDP ratio is lower now than when the Howard Government left office. When Howard left office, it was 23.8 per cent, while today (2021-22) it is 20.9 per cent. The average tax to GDP ratio from the introduction of the GST in 2000 to the beginning of the GFC was 24 per cent.

9 // Tax cuts, particularly to high income earners, make poor economic stimulus because they are more likely to save the extra funds rather than putting them back in the economy

Stimulus is only useful if it generates additional spending in the economy. If the intended stimulus is saved, then it does not increase spending and is therefore wasted. During a recession people become worried about the future and they attempt to build up a financial buffer by saving money. They do this in case they lose income through less hours or work or losing their job entirely.

The higher the household’s income the more they tend to save. This means a large proportion of any tax cut that go to high income earners will be saved and its stimulatory effect will be much smaller. Tax cuts and money given to low-income households are more likely to be spent as these households spend almost all their income on the essentials of life and have little or no capacity to save.

These means that the stage 3 tax cuts, which mainly go to high income earners are likely to be poor stimulus.

The timing of the stage 3 tax cuts also makes them poor stimulus. They are not legislated to come into effect until 2024. It is very unlikely that the economy will need major stimulus that many years after the recession.

10 // Taxation is popular with the general public, who understand that taxes are what we pay for a civilised society

It is commonly believed that taxation is deeply unpopular with the public. But polling by the Australia Institute shows that people have a more sophisticated approach to taxation than is often understood.

Australia Institute research polled a nationally representative sample of 1,000 Australians about their attitudes to tax.[1] It found seven in ten (69 per cent) of Australians agree with Oliver Wendell Holmes’ quote that ‘taxes are what we pay for a civilised society.’ With a majority of Coalition, Labor and Green’s voters agreeing. Six in ten agreed with the broader statement that ‘tax is good.’ Again, a majority of Coalition, Labor and Green’s voters agreed.

It is clear that taxation is not as unpopular as is commonly understood and the public would rather see more funding of government services rather than tax cuts.